< Back to market reports

The scale, length and triggers of each part of different financial and real estate cycles
can vary dramatically, but the stages and their sequence tend to be quite similar.
by Patrick Carlisle, Compass chief market analyst, San Francisco Bay Area


NOTE: This is a condensed version of our much longer, full report (with many more charts), which is available here: Article: 30+ Years of San Francisco Real Estate Cycles. 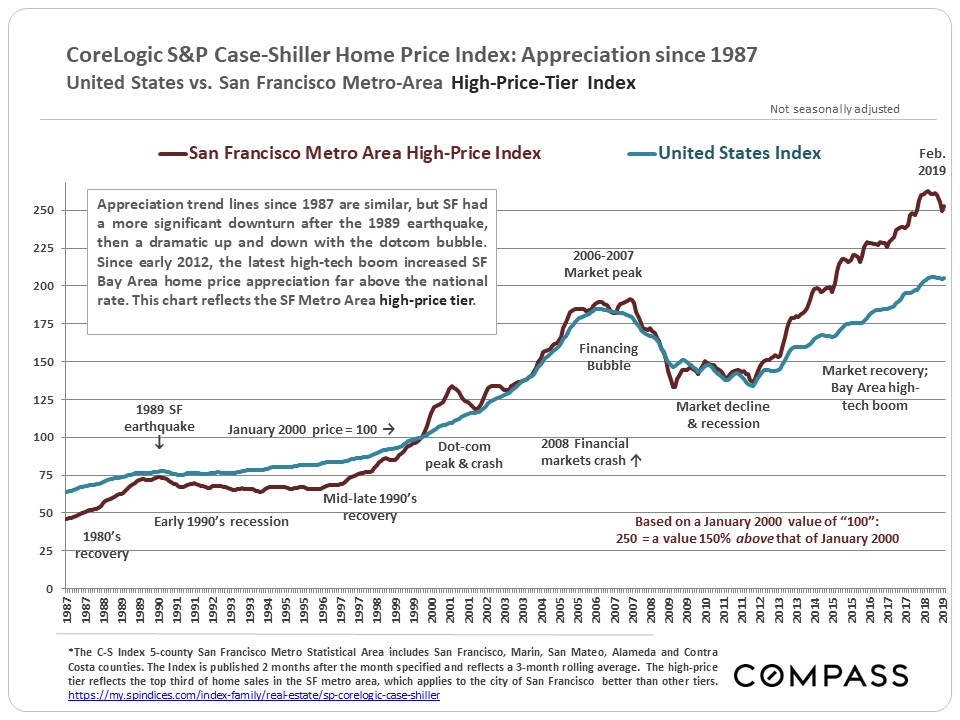 Regarding the chart above: The CoreLogic S&P Case-Shiller high-price-tier Home Price Index for the 5-county San Francisco Metro Area, illustrated above by the blue line, applies best to more expensive Bay Area housing markets such as most of San Francisco, Marin, San Mateo and Diablo Valley/Lamorinda. The SF Metro low- and mid-price tiers had much more dramatic bubbles and crashes in 2005-2011, but as of January 2019, have ended up at points somewhat higher than the high-price tier due to accelerating appreciation rates in those segments in recent years. The green line tracks home price appreciation for the United States as a whole. The Case-Shiller Index is predicated on a January 2000 price of 100. “250” signifies a price that has appreciated 150% since January 2000. CoreLogic S&P Case-Shiller website 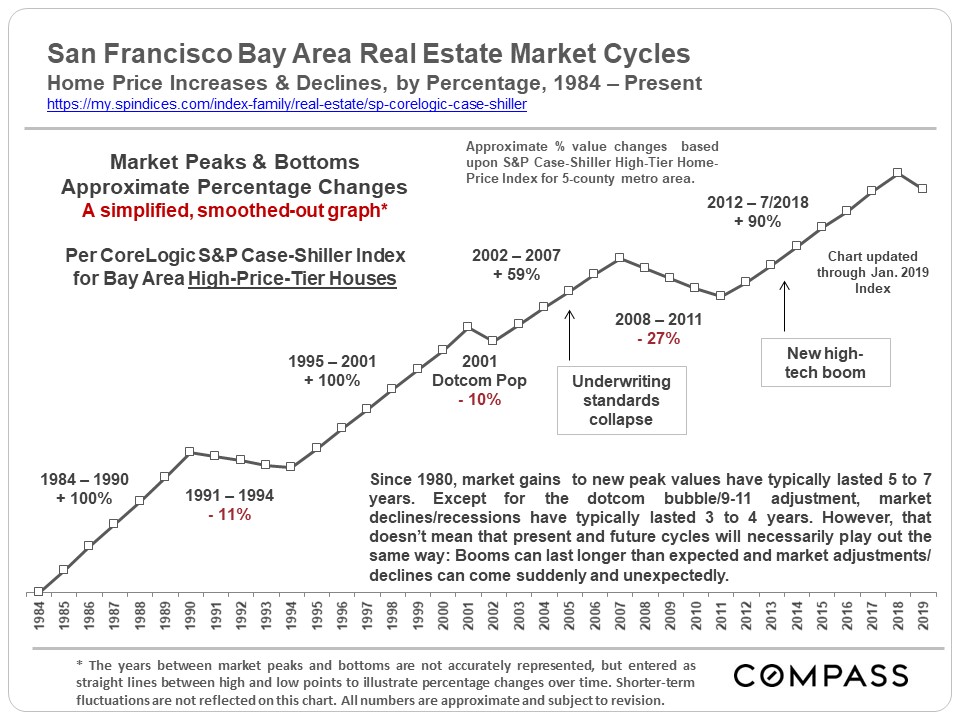 This chart above uses Case-Shiller Index data (for the 5-County SF Metro Area high-price-tier home) to plot total home price percentage increases and decreases between low and high points in cycles. It is very simplified and smoothed out, and does not illustrate any smaller ups and downs between the major nadirs and peaks, nor does it reflect any differences in acceleration in appreciation between those points. Note that there have been, at times, considerable differences in appreciation rates between different markets within the 5-county metro area, and that this is a generalized overview.

Regarding the small tick down illustrated at the end of this chart: It is unknown whether this indicates a significant transition in cycles - with the price peak of the latest upcycle occurring in summer 2018 - or whether it is only a short term fluctuation that will disappear during the spring 2019 market.


---------------------------------------
Financial-market cycles have been around for hundreds of years, from the 1600’s Dutch tulip mania through our recent speculative frenzy in crypto-currencies. Though cycles vary in their details, their causes, effects and trend lines are often similar, providing more context as to how the market works over time.

Human beings have always been worried about (or terrified of) the future, and going back many thousands of years, we have constantly attempted to predict what it holds. However, whether using priests, oracles, astrologers, economists, analysts or media pundits, we show no aptitude as a species for having the ability to do so with any accuracy. In 2012, a Nobel-Prize-winning economist, famous for housing market analysis, said that the U.S. real estate market might not recover "in our lifetimes." In hindsight, we now know that the recovery had already begun in some markets such as San Francisco. In 2015, during a period of financial market fluctuations and a slowdown in our local high-tech boom, a well-respected Bay Area economist predicted that there would soon be “blood in the streets of San Francisco.” But within cycle phases, there are often shorter-term periods of economic, ecological and political volatility which then pass. In 2016-2018, housing and stock markets soared higher and the high-tech boom strengthened again. (The economist has since postponed the arrival of blood om the streets until 1919 or 1920.)

Our smartest experts can’t get it right, much less the thousands of glib, confident forecasts by utterly unqualified individuals reported on in the media every month. We can't even remember the mistakes of the recent past – one reason why we don't seem to be able to escape the curse of recurring cycles – much less foretell what's going to happen tomorrow. Which leads to the next point.

It is extremely difficult to predict when different parts of a cycle will begin or end. There is no rule regarding how long the different parts of a market cycle will last. Boom times, even periods of “irrational exuberance,” can go on much longer than expected, or get second winds, with huge jumps in values. On the other hand, negative shocks can appear with startling suddenness out of nowhere, often triggered by unexpected economic or political events that hammer confidence, adversely affect a wide variety of market dominos, and then balloon into periods of decline and stagnation. These negative adjustments can be in the nature of a bubble popping, the slow deflation of a punctured tire, or some combination of the two.

Going back many decades, all the major Bay Area recessions have been tied to national or international economic crises. Considering the fundamental strengths of the local economy, absent a major natural disaster, it is unlikely that a major downturn would occur due simply to local issues. However, local issues can exacerbate a cycle: The 1989 earthquake intensified the effects of the national recession in the early 1990’s; our greater exposure to dotcom businesses produced a spike up and down with the NASDAQ bubble & 2000-2001 crash; and our current, raging high-tech boom has poured fuel on our up-cycle during the current recovery.

All bubbles are ultimately based on irrational exuberance, runaway greed, criminal behavior, or all three mashed up together. Whether exemplified by junk bonds, stock market hysteria, gorging on debt, a corporate Ponzi-scheme mentality, an abandonment of reasonable risk assessment, and/or incomprehensible and dishonest financial engineering, the bubble is relentlessly pumped bigger and tighter.

However, it should be noted that the 2008 crash was abnormal in its scale, and much greater than other downturns going back to the Great Depression. The 2005-2007 bubble was fueled by home buying and refinancing with exorbitant, unaffordable levels of debt, promoted by predatory lending practices such as deceptive teaser rates, no-down-payment loans and an abysmal decline in underwriting standards. The market adjustments of the early 1990's and early-2000’s saw declines in Bay Area home values in the range of 10% to 11%, as compared to the terrible 2008 - 2011 declines of 20% to 60%. (Bay Area prices are now above their 2007 peaks.)

Whatever the phase of the cycle, many people think it will last forever. Going up: “The world is different now, profits don’t matter, and there’s no reason why the upward trend can’t continue indefinitely.” And when the market turns: “Homeownership has always been a terrible investment and the market will not recover for decades.” But the economy mends, the population grows, people start families, inflation accumulates over the years, and the repressed demand of those who want to own their own homes builds up. In the early eighties, mid-nineties and in 2012, after about 4 years of a recessionary housing market, this repressed demand jumped back in – or "exploded" might be a better description – and home prices started to rise again. Then kept rising as consumer confidence returned; ultimately moving into over-confidence and irrational exuberance.

The nature of cycles is to keep turning.

As long as one doesn’t have to sell during a down cycle, Bay Area homeownership has almost always been a good or even spectacular investment (though admittedly if one does have to sell at the bottom of the market, the results can be painful). This is due to leverage - the ability to finance one’s purchase (and refinance when rates drop) - certain tax benefits (though those have lessened with recent federal tax law changes), the gradual pay-off of the mortgage (the “forced savings” effect), inflation, and long-term demographic and appreciation trends.

The best way to overcome cycles is to buy a home for the longer term, one whose monthly cost is readily affordable for you now, ideally using a long-term, fixed-rate loan (refinancing to lower rates when that option opens), while keeping an adequate financial reserve for emergencies - and then resisting the urge to use your home as an ATM during times of significant appreciation. If one keeps to those rules, then it usually true, quoting a NYT editorial, “Renting can make sense as a lifestyle choice... As a means to building wealth, however, there is no practical substitute for homeownership.” 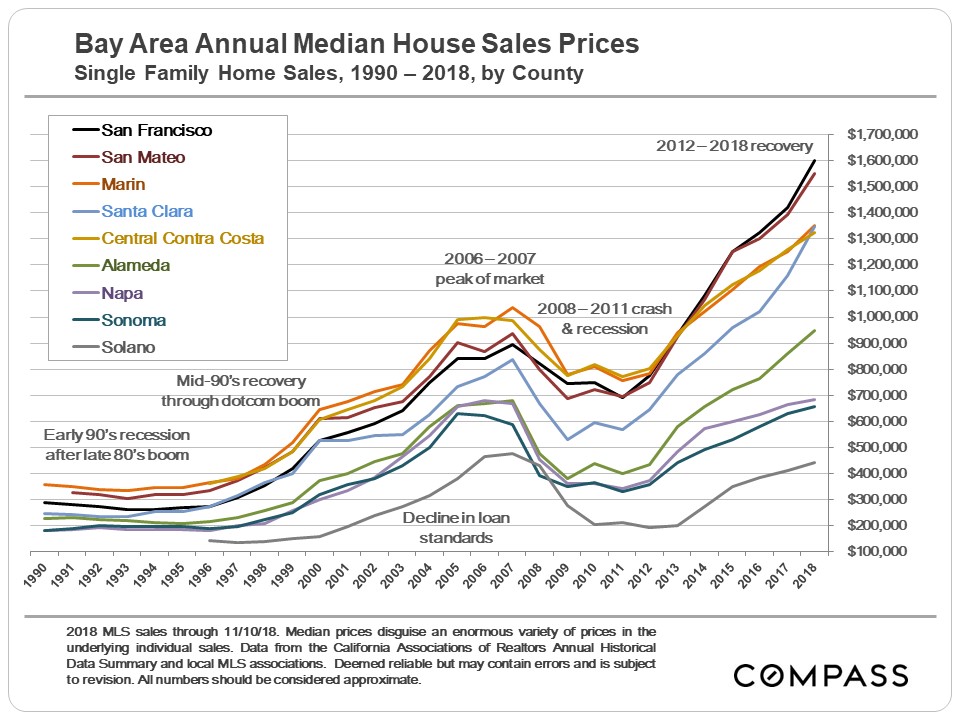 These analyses were made in good faith with data from sources deemed reliable, but may contain errors and are subject to revision. It is not our intent to convince you of a particular position, but to attempt to provide straightforward data and analysis, so you can make your own informed decisions. Longer term trends are much more meaningful than short-term.

Compass is a real estate broker licensed by the State of California, DRE 01527235. Equal Housing Opportunity. This report has been prepared solely for information purposes. The information herein is based on or derived from information generally available to the public and/or from sources believed to be reliable. No representation or warranty can be given with respect to the accuracy or completeness of the information. Compass disclaims any and all liability relating to this report, including without limitation any express or implied representations or warranties for statements contained in, and omissions from, the report. Nothing contained herein is intended to be or should be read as any regulatory, legal, tax, accounting or other advice and Compass does not provide such advice. All opinions are subject to change without notice. Compass makes no representation regarding the accuracy of any statements regarding any references to the laws, statutes or regulations of any state are those of the author(s). Past performance is no guarantee of future results.